Further Thoughts on the Lore of DDLC (spoilers)

Since I have gotten DDLC Plus, I figured I should write about it. One of the main selling points of the new edition of the game is that it would expand the universe of the game a bit. And it definitely has! Things that were not on the original release have been added. Now the original game is a game inside of a game. Does that make sense? When you first load up DDLC Plus, it takes you to the main menu screen of the original game. I was honestly confused on where I would access the Side Stories that I was excited for. But when I wanted to get off the game, I clicked 'Exit DDLC'. And that is how you actually get to the menu of the new version of the game.

It is here, from context clues (and probably some web searching like I performed) that you learn more about what the new lore is all about. You are on a fake computer desktop (not unlike the ones that you can find on Neocities, actually.) This "computer" being owned by company named Metaverse Enterprise Solutions. The main game is actually a simulation run on a virtual machine (VM1). The company seems to be testing artificial intelligence to prove that it can be profitable to upper management. Through emails uncovered when you complete more of the game, the employees argue whether it is ethically okay and other questions.

The original game is VM1. This is the one where Monika can do all the crazy things by accessing the game's files. Snapping peoples necks 'n' stuff. Typical Monika things, really. But the Side Stories included in this game are also part of the lore. In this simulation, Monika is never given her coding powers. It's referred to as the "control" situation. As such, we are able to see how the characters react with each other way more. Monika, besides the no-coding thing, is the same. I think this means that the other girls are sentient as well. And the new lore also answers the question about whether Monika knows that she is real or not. Us, in real life, know that she isn't real. But her autonomy, in-game, makes more sense. She is self-aware. She is trying to reach the people that control her world, not us. I guess. That part is still a little fuzzy.

I am so glad I was able to pick up this game. Thanks, Steam Summer Sale! Although, if I really wanted to get it, I could've got it pretty easily. It's low-priced. It is more expensive than free, however.

This game is fun to read/play, for sure. I really enjoyed the first version of the game, so being able to see the characters again in new scenarios is great. Ever since they announced DDLC Plus, it has been on my wishlist. It's been a long bit since it was announced. Back then, my main source of gaming was my Switch. I heard about the announcement through a Nintendo Direct. Oh, how things change.

This is actually one of the first games where I have wanted to 100% it. All the extra content is worth it. As of writing, I am at 88% completion. 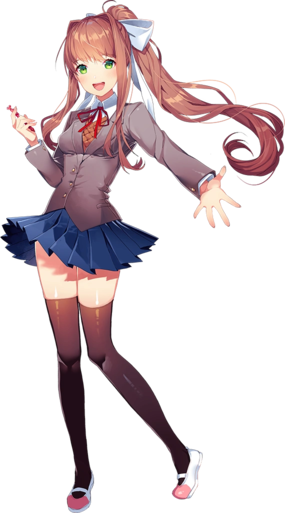