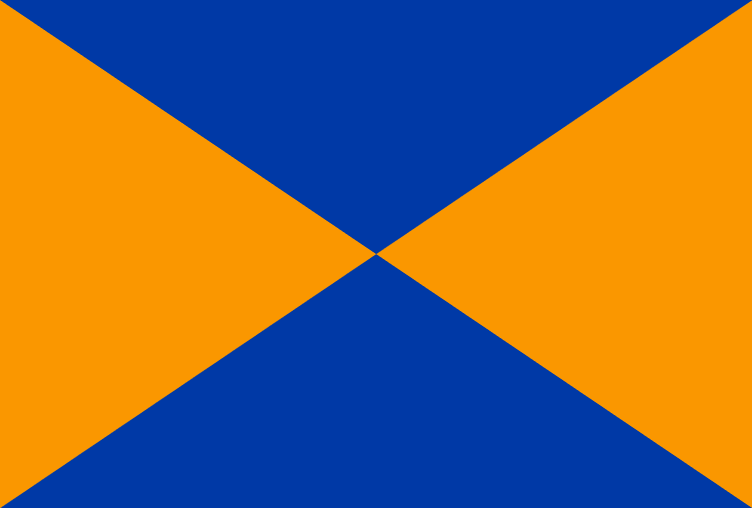 What Oflen's flag was when this article was written.

[This article was written on 3/8/21 by the king with the intention of being published later.]

Our Flag & Motto are Created!
After deliberating and taking several hours to experiment with designs. The king has decided on a flagfor our country. He intially was for a green-yellow combination, but it wasn't working out well in the design. So he went with his school's colors, which have a significance to the region the nation is in.
Blue: Symbolizes the river that borders the nation, and the water that is throughout the region the country is in.
Orange: Represents the Citrus that once grew on the shores of the beach near the nation.
He also decided on a motto. "Ut confortemini se" which means "May we always be strong!"

Merger Oppurtunity
A new oppurtunity for a merger has emerged (pun not iniatially intended). Last year, before the king was a king, the king met with the President of a micronation called the Internet Union by joining it's Discord. It was a unique country start-up. Instead of making a claim to some land like others do, it claimed a website. If another website was added into the Union, that website got representatives. The goal was to ultimately make the World Wide Web a better place, and to connect people. The king left the Discord, and in the meantime, the Internet Union was plagued by inactivity.
The king, now the leader of his own nation, started looking for diplomatic realationships. He then remembered the Internet Union's server. After a few hours of not hearing anything back from the President of the IU in server, he contacted him in a DM. They chatted, and was briefed on the situation. But then President RichRacc realized something. The king being there had brought in the most active people in months. RichRacc at first offered King Walker a job in the IU's congress. The king refused, mentioning that he had his own nation to serve. But then the king gave some options, including one where the IU and Oflen could merge. President RichRacc iniated a vote. It is still being voted upon right now. If that vote wins out, then the proposal would have to gothrough Oflen's congress.